Twilight of the Solstice: Order Now!

Twilight of the Solstice: Order Now! 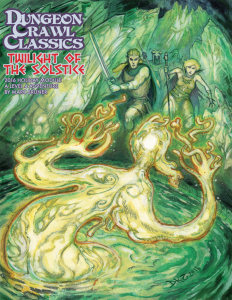 The 2016 DCC holiday module Twilight of the Solstice can now be ordered through our online store! A conflict at the end of time! On the eve of the winter solstice, long-banished giants from the frozen void strive to complete a ceremony that will cause an endless winter to envelope the world. The adventurers find themselves torn from existence, stripped of not only their equipment, but their very memories, and summoned to the far edge of the world to repair an ancient temple of time. Will you recover your abilities and solve the challenges of the world clock before the end of time itself?

An exploration-based adventure taking the characters deep into the icy depths of unknown, Twilight of the Solstice tests the player’s ability to confront the challenges of the harsh winter setting while also unraveling the singular puzzle of their own identity. Faced with limited knowledge and time, only the most crafty – and lucky – can hope to defeat the returned agents of primeval chaos and restore events to their proper course! 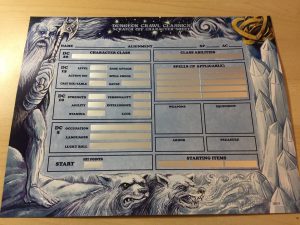 The print version of this module comes bundled with six random scratch-off character sheets that contain all the hidden stats, weapons, and spells so that the players can discover their characters during the adventure. The PDF obviously does not have scratch offs, but fear not! It does include a mechanic for generating random characters as you play.

Order now! And don’t forget about our previous holiday modules too: