There have been some new podcast episodes lately that fans of Goodman Games might be interested in. Newer fans may not be aware of some of the other podcast resources out there. So here is the Goodman Games podcast roundup!

Spellburn: The Judges J have made two new episode in the last month! Episode 44: Invoke Brendan LaSalle features (as you might guess) an appearance by Brendan LaSalle. Episode 45: Seasons in the Abyss takes a close look at demons in the DCC RPG game.

Drink, Spin, Run is a podcast about old school gaming topics. They recently recorded the Old School Games Design Panel at U-Con, at which Brendan LaSalle was one of the presenters.

Each episode of Sanctum Secorum looks at a work from Appendix N and discusses how it fits into DCC RPG. As a bonus, each episode features a companion PDF with DCC RPG stats for things from that episode’s book!

Glowburn: Brendan LaSalle has not yet been on this new podcast devoted to the Mutant Crawl Classics RPG!

Designers & Discourses episodes each interview a creator in the RPG industry. Michael Curtis, James M. Ward, and Harley Stroh have all been on it already! Could Brendan LaSalle be next? 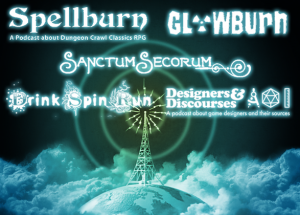