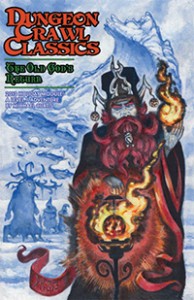 In The Old God’s Return, a slumbering god awakens in the Forlorn North. The heroes are chosen as champions of the Lord of Flickering Flames and are tasked with battling this forgotten evil. It is the very first of the now-traditional holiday DCC RPG adventures published. The winter holidays and DCC RPG aren’t two things you’d immediately think go together well, but this Michael Curtis-penned module juxtaposes them skillfully.

So why a holiday DCC adventure in the first place? The idea sprang from Joseph Goodman’s own patterns of roleplaying. “Now that I’m older and have a family,” he says, “I often use the holiday down time to find space to game. And for many years, those games often involved my family – often my younger cousins, occasionally others who I would see over the holidays. So it seemed reasonable that the DCC fan base, many of whom are in a similar stage of life as I am, may also find time to game over the holidays. That was the basic idea behind the holiday DCC line.”

Michael Curtis was given the job of creating and writing the adventure. Michael was given free reign to do what he wanted, as long as it was Christmas/holiday themed. Obviously, he decided to skip the more Christian and American influences and go back to older, darker traditions. But it’s not actually influenced by the things that many people assume it is.

Michael explains: “People wrongly assume that I’m channeling the Krampus myth in this one, especially with the Joulbok, who are depicted as goatish humanoids. However, The Old God’s Return is actually steeped in Scandinavian folklore, especially Finnish mythology. I’m partly Norwegian and I grew up with a lot of the Scandinavian Christmas traditions. I tapped into that when writing the adventure. The Joulbok are based on the Julebok or ‘Yule Goat,’ which are common Christmas decorations in Scandinavian countries (and likely owe their origin to the goats that pulled Thor’s chariot in Norse mythology). The Tontuu are a type of house spirit, called nisse in Norwegian, which resemble your classic garden gnome. We had julenisse or ‘Yule elves’ decorations as a child, paper elves that would be placed around the house. I had to include them in the adventure, but as much more malignant creatures. The god who appears in the adventure is based on the Finnish forest god called Tapio, with some reindeer refinements by yours truly.” 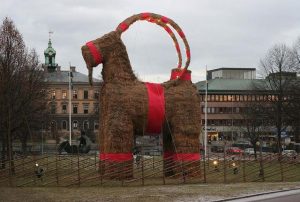 “The general premise of heat vs. cold that permeates the adventure comes from the idea that the forces of summer and winter battle on the Winter Solstice,” he continues. “I wanted the characters to represent the forces of heat and summer, and thus the Sovereign Fire idea came into being. And there’s more than a little of the Fantastic Four’s Human Torch influence there too. Lastly, the adventure title itself comes from a Blue Ӧyster Cult song. I always try to slip in some BӦC when I can.”

The climax of the adventure is not what you’d expect. Having already defeated the re-emerging god, the surviving characters make a tense escape where characters’ lives are almost entirely at the mercy of random dice rolls. The Old God’s Return certainly isn’t the only DCC adventure to kill characters purely based on the dice, but putting every character through it right at the end of the adventure may strike some as unfair.  Michael has reasons for ending it that way, though.

“I was looking at the Holiday Adventure as a one-off, which is also why I made it 1st level. I had the idea, perhaps wrongly, that this adventure was supposed to be something gaming groups could play as a holiday break from their normal DCC campaign, wrapping it up in a single session. For that reason alone I wanted a big climax and figured if one-shot PCs died in the wreckage, it wouldn’t cause too much trauma to the player who lost his or her character. My advice then is if you’re running this as part of an ongoing campaign to hand-wave some of the final escape or to reduce the difficulty of making it out in one piece.”

The Old God’s Return is out of print, and currently only available in PDF format. You may also enjoy our other DCC RPG holiday modules: