Forgotten Treasure: The One Who Watches From Below

Forgotten Treasure: The One Who Watches From Below 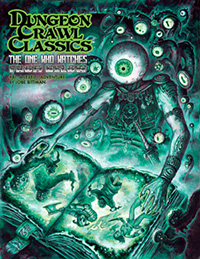 DCC #81: The One Who Watches From Below

DCC #81: The One Who Watches From Below by Jobe Bittman is an adventure that oozes with dark Appendix N flavor. Eyeballs, earthworms, a curse, and one of the most memorable covers of the entire DCC line make it destined to be a dungeon crawl classic in every sense.

The adventure came to be in a pretty unorthodox way, though. The 2012 Free RPG Day adventure included a “Mystery Map Adventure Design Competition” that garnered a number of interesting submissions. Inspired by contests run in the 70’s and 80’s by various game and comic companies, the Mystery Map Contest concept came about as a result of conversations between Joseph Goodman and artist Doug Kovacs. Joseph elaborates: “If you look at old comics from that era they often have a banner running across the top of the cover advertising some contest (usually awarding a free bicycle, if memory serves). Then there was this era where ‘searching for clues’ type games became popular. In the late 70’s / early 80’s there was a RPG company called Metagaming (where Steve Jackson got his start) that buried a solid silver unicorn – and later, a solid gold dragon – then published a module with clues on where to find it. In the 4E era we started on one such contest module, where Chris Doyle actually identified a location and clues leading to it, and we were going to hide a treasure there and publish a module with clues, but 4E died on the vine before that initiative got far.” Doug’s idea was to have an unfinished map that contestants would finish, and that map was then put into the wild where aspiring adventure authors would find it and submit their entries. 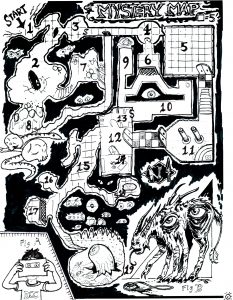 The contest got a bunch of really good entries, but Jobe Bittman’s submission stood out. “Jobe won because it was all well written, he visualized the map well, and he used the existing map and the creature. Finally what pushed it over the edge was the major thing, a new idea, the eye ball mask thing,” says Doug. For Jobe, the contest format played to his natural inclinations. “When I write adventures, drawing a map seems to solidify my thoughts. I’m a visual thinker. In this case, the map was partially created and I also had the design constraint of including a hound-like creature with large eyes on its side. I drew out a fun looking map incorporating the eye motif. Then, it got a little out of hand. I had a thing about eyeballs for a number of years, and made a habit of studying them in the wild. Everyone looks at you crazy when you are always staring them in the eyes,” he says.

One of the most notable elements of the adventure is the Curse of the Emerald Eye, which requires afflicted players to hold a mask over their face and try to communicate only with their eyes. The central idea of the curse, Jobe says, it that it’s an on-ramp to the roleplaying hobby. “The average person walking down the street isn’t comfortable pretending to be an elf in front of a group of people. Now take this same fictitious person and tell them to put on a mask and pretend to be an elf. It’s much easier for them. I’m sure there is some studied psychological phenomenon behind this effect, but this is just my observation. When a new player sits down to play a tabletop RPG, it can be very intimidating. Often it’s with a group of more experienced players that might really get into character, talk in a funny voice, or dominate the action. When I’m running this adventure at conventions, I always steer new or shy players to the thief pre-gen character sheet (knowing that PC will usually be the one who tries to steal the cursed gems). When the PC is cursed, a few dynamics come into play. First off, the player has a face shield in front of their face that I think lessens social anxiety. Secondly, the player is asked to only communicate with blinking or eye expressions, a task that I think most people can handle without being self-conscious. The player becomes the center of attention for the entire table in a non-threatening way. It’s my hope that these players have an exhilarating initial experience that keeps them coming back to the hobby.”

When it came time to flesh out his submission into a full adventure, Jobe let free quite a few images that were held in his brain.  “The halfling hybrids are directly inspired by the dwarves from the horror movie Phantasm. Those little guys always freaked me out. The laser harpy was inspired by the ‘Laser Tits’ meme, for those that are familiar with it. The earthworm iconography came from a dream. I was trying to come up with some imagery to balance out the eyeball theme. I had this nightmare where I was staring into a black pit filled with wriggling earthworms, then a pair of eyes sort of floated up to the surface of the worm mass and stared at me. That’s how I decided that Shigazilzizthrub’s favored creature was the earthworm which became statues, tapestries, giant acid worms, and strange customs. I was going for a Lovecraftian feel with the adventure so I borrowed the name Whately for my evil wizard, though the character has little in common with the literary namesake.” 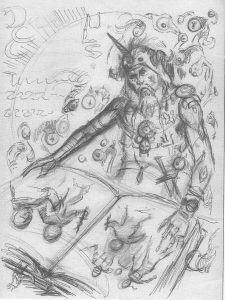 One of Doug’s early cover sketches, showing Whately with his original human head.

The wizard Whately went through a transformation during the process. Originally, he had a normal human head. Jobe says, “The original idea I had for the cover was a human wizard reading a glowing tome surrounded by eyestalks. After Doug sent out cover sketches, Joseph had the idea of replacing the wizard’s head with a giant eyeball. I hated the idea, but I figured Joe is the boss. He can screw up the cover all he likes. I went back to the text and created the Dark Form Whately to match the new cover. Once Doug finished the actual painting, I loved it. I’m glad it turned out the way it did. It’s one of the best covers in the DCC RPG line as far as I’m concerned.” Several of Doug’s cover sketches showing the evolution of Whately can be found in the Gen Con 2014 Program Guide.

Since its publication, and even before it, The One Who Watches From Below has provided gaming groups with fun nights and tons of great stories. Jobe has quite a number of stories about playing the adventure himself. “One story that sticks out in my mind is when Jim Wampler played as a wizard at a Gen Con game. Right before the entire party was wiped out, the wizard invoked the King of Elfland and his wizard went back in time to warn the party about their impending slaughter. Jim bragged for months that he had ‘broken the adventure’, but rather than flee, the PCs doubled-down. The players came up with a new plan for snatching the loot despite Marvin the Mage’s protests. It sort of worked too. The party only lost 2 members instead of a TPK. How’s that for breaking my adventure?”

DCC #81: The One Who Watches From Below is available at our online store in print and in PDF format. 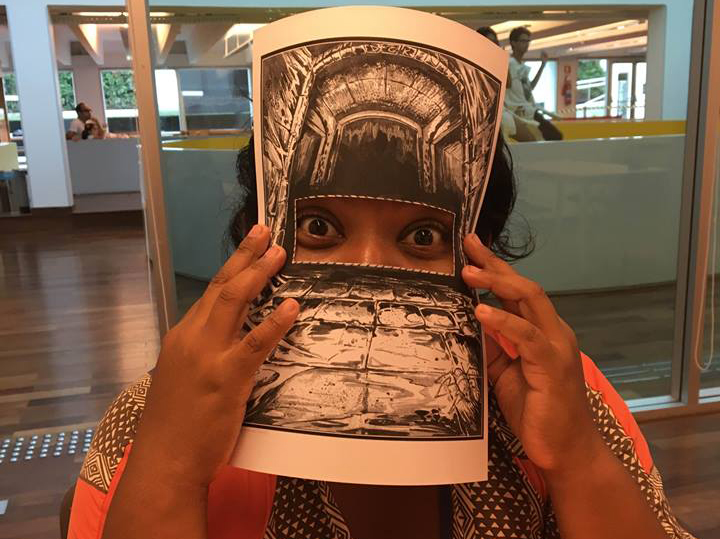 Another hapless player falls victim to the Curse of the Emerald Eye.