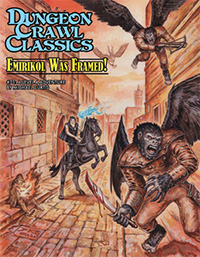 The hook for DCC #73: Emirikol Was Framed! is pretty straightforward: the archmage Emirikol has gone crazy, terrifying the city and slaughtering people! Brave adventurers are needed to defeat him. But since it’s a DCC module by Michael Curtis, you know it’s not quite as simple as it sounds. In fact, Emirikol Was Framed! is the first DCC RPG adventure that now-famous-in-certain-circles Michael Curtis wrote!

Emirikol was Framed! also owes its existence to two other people: David “Trampy” Trampier and Joseph Goodman. Emirikol the Chaotic was an iconic character from the early days of D&D thanks to artist David Trampier’s full page illustration in the AD&D Dungeon Masters Guide (1979). It is one of the most iconic illustrations in a game chock full of iconic illustrations, so it’s no wonder that Joseph Goodman wanted to base a DCC RPG adventure around it. “Many of us who got our start in the hobby remember that illustration vividly,” says Michael Curtis, “and I personally recall imagining who I was in that picture every time I looked at it. (For the record, it was the guy ducking into the alley. Even at a young age, I understood discretion was the better part of valor.)” 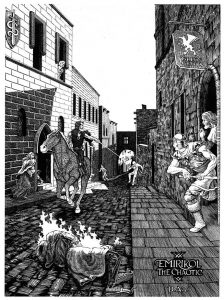 The original “Emirikol the Chaotic” by Dave Trampier.

The adventure came about title-first, which is not the way these things usually happen. Michael received an email from Joseph Goodman explaining how he had the idea for an adventure title—”Emirikol was Framed!”—in mind and wanted Michael to write an adventure around that one sentence. Michael elaborates: “Aside from the title, Joseph gave me a free hand in designing the adventure, so there was little discussion about the content. As Emirikol was my first professional adventure, Joseph had a lot to say during the development phase to help improve and get it more in line of what he envisioned for DCC, but it was pretty much ‘Here’s the title; now go!’ from the start.”

And Michael used that free hand to bring in a number of influences, from Appendix N and elsewhere. Emirikol’s flying ape thugs are based on the clakar, the winged apes that Elric faces off against in Moorcock’s Eternal Champion stories. Emirikol’s tower was inspired by the Tower of the Elephant from the Conan story of the same name, but the lions from the story were replaced with watch leopards as in “Ill Met in Lankhmar”.

But there is another subtle reference to a non-Appendix N source that no one has picked up on yet. “When we were working on DCC RPG, Joseph had a laundry list of other inspirational sources he wanted to incorporate into the game and the adventures aside from the Appendix N stories. In case you’ve missed it, there’s a very 1970s vibe to DCC. Among those ‘other inspirations’ were the films of Bruce Lee. Emirikol has an obscure reference to Lee’s final film, The Game of Death. One of the last guardians the PCs face in Emirikol’s tower are oversized, long-limbed brawlers called the Kaj. They are based on Kareem Abdul-Jabbar’s character from The Game of Death and the name Kaj is itself an acronym of the actor’s name.” 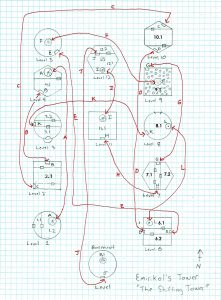 The art and cartography of Doug Kovacs has been integral to the DCC RPG line since the beginning, but his map for this module this module took things to a new level. A place called “The Shifting Tower of Emirikol the Chaotic” requires a map that is, well, chaotic. Doug did not disappoint in that regard. In comparison, Michael’s original hand-drawn map is well-ordered and neat.

But even when the judge has an orderly playtesting map, players have a tendency to make things difficult to keep track of. “When I was playtesting it on the convention circuit, I had one of those groups that DCC RPG judges both love and fear. They knew it was a convention game, so they had no qualms about spending Luck or spellburning their wizards and elves down to the ground. In one of the very first encounters, the wizard spellburned himself down to 3s in almost all his physical abilities and the halfling kicked in Luck. The result was a spider climb spell that granted the entire party the ability to climb on walls and ceilings, throw webs, and have poisonous attacks for an entire day. In all my years of running games, this was the only time I had a marching order where characters had to be noted as being ‘on the floor’, ‘on a wall’, or ‘on the ceiling!’ That’s something you don’t see in games other than DCC RPG!”

Looking back on the adventure four years after he wrote it, Michael says, “It’ll always be my first Goodman Games adventure module, so old Em will always have a place in my heart. As a writer, however, it’s tremendously difficult for me to go back and look at older work. I can’t do so without seeing what I’d do differently, cringing a little, and seeing where my skills have (hopefully) improved. Emirikol is a solid adventure, though, even considering it was written at a time when there weren’t any 4th level DCC RPG characters in existence!”

There is one aspect of the module that Michael has never been fond of. Even though the adventure sprang into being from the words “Emirikol was framed”, he didn’t think it should be the title for the finished product. “I pushed against the idea,” he says, “telling Joseph it was a great elevator pitch, but it robs the adventure of any mystery or uncertainty when you slap it on the cover. If you’re thinking of running this one for your players, my advice is to keep the title to yourself and hide the cover from their prying eyes until they’ve reached the climactic battle between Emirikol and Leotah.”

Emirikol Was Framed! is available in print and in PDF. 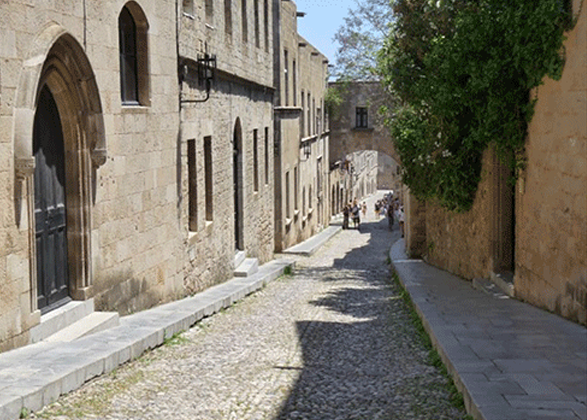 The Street of Knights in Rhodes, which Trampier used as the background for “Emirikol the Chaotic”.