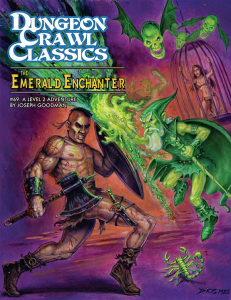 The Emerald Enchanter was one of the initial modules released when the DCC RPG rules first came out. Written by none other than the Dark Master Joseph Goodman himself, the module takes adventurers into the stronghold of a wizard who is performing strange magical experiments on the folk of their home village. A dungeon crawl in the truest sense, the introductory text plunks the party down right at the door of the Emerald Enchanter’s lair, and the quest ends when the villain is defeated (or when the party is all dead, of course. This is DCC after all!) DCC modules aren’t known for their extensive back stories, but The Emerald Enchanter has even less than most.

Joseph says this is “partly style – I really like adventures to be completely stand-alone – and partly because this was a really early playtest adventure. I was running lots of one-off games at cons and stores, and I was mostly concerned with testing rules as opposed to making an adventure.” But don’t let that fool you into thinking the adventure is somehow lacking. It’s that much easier to drop into any campaign, and it’s still plenty entertaining.

In addition to the titular enchanter, the adventurers face off against emerald automatons, alien extra-dimensional beings, and perhaps the best reemembered threat of the module: flying emerald skulls. “All the original pulp novels feature skulls as iconic imagery. I collect books on pulp novel art, and you just can’t get away from the constant depictions of skulls. In general I was trying to think of ways to make skulls more interesting, not ‘just another talking skull’. Hence the one set of flying skulls – not JUST flying, but also emerald! – and another giant skull embedded in a wall and able to shoot lasers,” says Joseph.

Despite these elements, some players feel that the earlier DCC RPG adventures, including The Emerald Enchanter, aren’t as boundary-stretching or genre-bending as a lot of the more recent ones have been. Or in the term that some people have used, they’re not as “gonzo“. But Joseph doesn’t see DCC RPG as gonzo at all.

“Doug [Kovacs] and I were talking about that recently. That word never once came up when we were working on the game. I still recall the first time I saw DCC referred to as ‘gonzo’; I had to google the term because I wasn’t sure what it was referring to. If I were to write Emerald Enchanter again now, I might change up some parts of the map, which in retrospect are small and cramped. But I don’t think I would change many encounters. It still feels like Robert E. Howard, Abraham Merritt and Clark Ashton Smith all mashed together, which was the intent.” 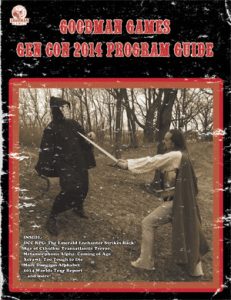 Whether or not it is “gonzo” (and whether or not you think that is a pro or a con), The Emerald Enchanter is a challenging and unpredictable adventure. It’s also the first of the modern line of DCC adventures to get a sequel. Joseph explains how that came about: “We published more than 70 adventures in the DCC line before the DCC RPG rules set was published. There was a lot of great story there still left to be told. At one point in the development of DCC RPG, I asked writers to send me ideas on mini-adventures that could expand some of those early characters into the DCC RPG rules set. That’s how we got a Rat King adventure in DCC #83 and an Emerald Cobra adventure in DCC #82.”

Author Jobe Bittman answered the call, but focused on a more modern enemy. “I laid out the DCC RPG modules I owned and tried to imagine some further stories. When I saw the little green man on the cover of The Emerald Enchanter the idea for the story suddenly popped into my head. Why would the enchanter be green anyway? The green man is obviously an emerald clone of the real villain. I drew a simple map with a few towns and printed out all the statblocks from the original adventure. The next weekend, I ran the adventure for my buddies off the cuff. As they trekked across the map, I made up some new monsters and reskinned the statblocks all the while making a show of flipping through the stack of papers containing the ‘adventure’. I did my best to freak them out and screw them over, but they found the enchanter and delivered a vicious beatdown. At the end of the game, I threw the blank pages on the table and announced that I had just made up the entire adventure on the fly. Of course, those jaded bastards weren’t even impressed. I went home and transcribed what happened at the table into the adventure.”

Here’s what reviewers had to say about The Emerald Enchanter: 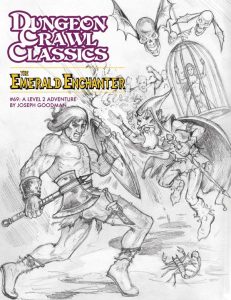