The party heads down the hallway, towards the voice. The way leads them down a flight of stairs. Ahead of them is a crumbled passageway, and to their right is another flight of stairs down. With nowhere else to go, the party heads down the second flight of stairs.
They find themselves standing at the threshold of a jail. There floor is covered in a mixture of sandstone debris and the bones of centuries of prisoners. There are five sets of manacles along the wall. The first four have skeletons in them; perhaps prisoners forgotten when this area was abandoned? The fifth and right-most contains your new friend.

He is tall, painfully thin, with ashen grey skin. He licks his lips and you get a look at his fanged teeth. There is a blood spot on the wall, about in line with his forehead; it seems he's been "polishing" his head against the wall. His forehead is a mix of blood, sand, and abrased flesh.

Next to him, against the wall, is a dead Kith. A strange plant is growing out of the Kith's chest, with three black, plum-like fruits growing on it.

"Greetings. I am Tio-Lizix, Navigator of the crashed Ythothian Raider ship you must have found by now. [Where is it? It's down here I know it!] And...meat. MEAT." Tio-Lizix claws at the hagflesh. His chains are mounted to the wall, with about 6 feet of length to them. With you standing at the threshold of the room, he cannot reach your meat-on-a-stick. He looks desperately hungry.

What will you do?
Top 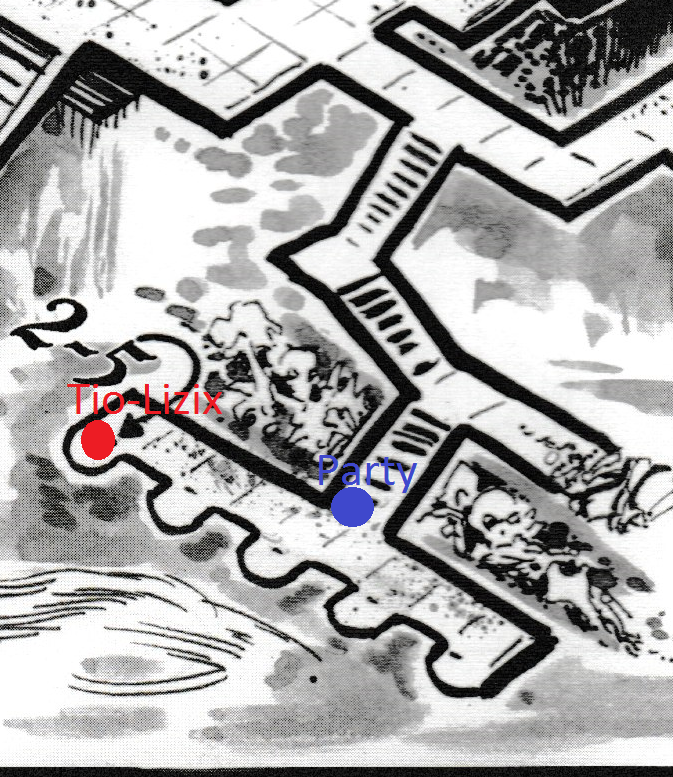 Tio-Lizix smiles at Arvis. "It is the ebon plant. The plant of death [the plant of life!]. I forced this brute to eat its seeds. And the plant. Has. Flourished. Each fruit you see here sustains me for ten years, each stolen from the poor [disgusting] creature. And yet, I've grown so hungry. It does not fill the stomach. It does not scintillate the senses. It is not... fulfilling.

[I must make a good impression, all depends on gaining their trust. Gaining freedom....]"
Top

The ebon-plant and its host are against the wall to his left.
Top

Is the plant-host kith chained to the wall as well, or does it appear to have been free before being forced to eat the seeds?

Nurzual will gesture for Arvis to come back rather than give the creature meat.

Nurzual: Naturally, before we could give you food or think about setting you free, we would need you to promise that you won't force any of us to eat such seeds.
Purple Planeteers:

It looks like the Kith was free before it ate the seeds.
Top

Qort says, nervously, "Why is his mouth not quite moving the way the words are coming out? Do you ... do you think he might be like one of those ven .... uh ... vendrillicker's dummies, and there's a monster with its hand up his bum?"

Brandybland: I don't know, but this is starting to make me feel like I'm fixing a customer's boots on a hot day and he's been wearing no socks.

Both of them back up a bit.
Purple Planeteers:

Tio-Lizix smiles. "Yes. I know the way out. But you would never figure out how to use the ship without me. Without me, you are as trapped here as I am. [Of course, the Hag may have known of another exit. How else could she have lived so long on such meager meat? But she's DEAD.]" The mad navigator looks remorseful for a moment. "Make your decisions, [and then I will make mine]."
Top

Nurzual: Well, if this fellow won't even promise not to force deadly seeds down our throats, and it looks like he has another 30 years' worth of those fruits to sustain him, I don't feel terribly bad about just leaving him here, friends.

Qort: And how hard could it be to sail a ship, anyway? You just hang the sheets on those big wooden poles and let the wind push you, right? I say we go find it and get out of here.
Purple Planeteers:

Arvis calls Beega to his side and hands him the meated spear, in so doing sidesteps toward the kith corpse minding Tio's reach. Pointing to the side of the creature opposite the corpse-blossom, says:
Arvis:"Beega, kasta matnum við hann. Það."
Unwilling to potentially arm him, Beega tosses the meat from the spear point to the side of Tio-Lizix...
Beega:"Borða, illi andinn!"
...as Arvis surges forward to snag the nearest part of the dead kith and drag it and the plant out of Tio's reach!

Blackthorn keeps his distance, this doesn't look good, none of this looks good...

Fenris Ulfhamr wrote:Arvis calls Beega to his side and hands him the meated spear, in so doing sidesteps toward the kith corpse minding Tio's reach. Pointing to the side of the creature opposite the corpse-blossom, says:
Arvis:"Beega, kasta matnum við hann. Það."
Unwilling to potentially arm him, Beega tosses the meat from the spear point to the side of Tio-Lizix...
Beega:"Borða, illi andinn!"
...as Arvis surges forward to snag the nearest part of the dead kith and drag it and the plant out of Tio's reach!

Roll needed? I hope this works!

Your meat-based deception is able to distract the Ythothian madman long enough for Arvis to wrench the body from the wall. The alien wolfs down chunks of hagflesh until hearing the roots of the ebon plant crack in resistance as you wrench the body away.

"What? [What?!?]" Tio-Lizix strains against his bonds: 13+3 = 16. The millenia-old chains creak under his newfound rage. He hasn't freed himself yet, but revenge is clear in his eyes. "I will. GET YOU. I must. GET YOU. I WILL NOT DIE DOWN HERE."

"RUN!" yells Qort, and he does, headed for the broad staircase that seems to be the only unexplored route the party has yet to investigate.

Nurzual and Brandybland back more cautiously toward the stairs out of the jail, weapons held forward to meet any possible charge by the alien if it should break free.
Last edited by Bilgewriggler on Sun Oct 01, 2017 5:44 am, edited 1 time in total.
Purple Planeteers:

Putting a flint knife to the plant's stem, Arvis grasps the plant near the base, prepared to cut and hastily withdraw...
Arvis: "Frelsið þitt er enn til staðar, illi andinn. Við þurfum bara tryggingar að við munum ekki endar sem mat eða áburður.".
Beega holds his spear at the ready to cover him should the Ythothian break free. Both back up as they may, and Arvis makes clear he will cut the ebon plant if the creature makes aggressive actions.

Kelven is the first to follow Qort, with Toby not far behind.

Lucius hangs with whomever is still by the cell to back them up, as Harveth maintains position in order to defend others as they flee from the mad Thing, if it should completely break free...

Is this what they are actually saying in English, but run through some kind of online code creator, maybe?
Gnome Boy • DCC playtester @ DDC 35 Feb '11. • Beta DL 2111, 7AM PT, 8 June 11.
Playing RPGs since '77 • Quasi-occasional member of the Legion of 8th-Level Fighters.

Blackthorn says to hell with this and to hell with you and attacks the chained creature with his two handed sword making sure to keep as much distance as possible so that the chains will perhaps, for a time, keep him at a safe distance.

Duke stays by the kith and continues her fugue there is such magnificent beauty in this chaos she drops her torch to the ground without regard to its potential to stay lit, plucks one of the fruits from the plant, and begins to dine upon it carefully spitting any seeds or pits into her off hand to save for later.

(And there you have it: My most DCC round of action to date.)
PbP Purple Planeteers

Is this what they are actually saying in English, but run through some kind of online code creator, maybe?

SPOILER ALERT: It's Icelandic via Google Translate! Chosen arbitrarily because it sounded cool, in retrospect I would've used Russian due to the Kith's ursine cast...

Terra has the translations via PM also

Next Round
Tio-Lizix has been chained, weakened, without sunlight or water, surviving only on stolen time, for a thousand years. When Beega stabs him with the spear, his body gives out nearly immediately. The alien, for all his vitriol, had no fight left in him.

In the bony floor that litters this prison, near Tio's feet, lies a skull. Something silvery is sticking out of it; perhaps he had been secreting away his gear?

Duke completes her obviously evil act. The fruit tastes like a large cherry. You feel great.

The surviving Kith have the ebon plant and the dead Kith. There is no honor in his death; tricked and murdered.

Qort and the others who fled find their way down the large stairway and into a large open room. There is a dim glimmer of sunlight coming through the top of the cavernous room. Below the beam of light, a war ship is planted face-up through the ceiling and the ground, like it had simply teleported into place.

For reference, the ship would have looked like this if it were in perfect condition:
https://i.pinimg.com/originals/73/b6/e3 ... 6ef90c.jpg
However, it's not. If Tio-Lixiz were right, this ship has been down here, decaying slowly, for a thousand years.

(Yes, that is from a Spelljammer fan's site.)

Near the front end of the ship, on the ground, is a large pedestal. There is a quiet, almost electrical, humming coming from the center of the pedestal. It is shaped like a stone ring, with the interior containing the engraving of several unknown constellations.

What will you do?
Top

TerraGoetia wrote:Next Round
Tio-Lizix has been chained, weakened, without sunlight or water, surviving only on stolen time, for a thousand years. When Beega stabs him with the spear, his body gives out nearly immediately. The alien, for all his vitriol, had no fight left in him.
...
The surviving Kith have the ebon plant and the dead Kith. There is no honor in his death; tricked and murdered.

Hey hey now! Blackthorn hit him first, just didn't roll for it! I almost had a real pang of conscience there, TG!

Blackthorn didn't roll, so I interpreted it more as a "fend off" maneuver and less of a "stab him in the face" maneuver.
Top
Post Reply
558 posts